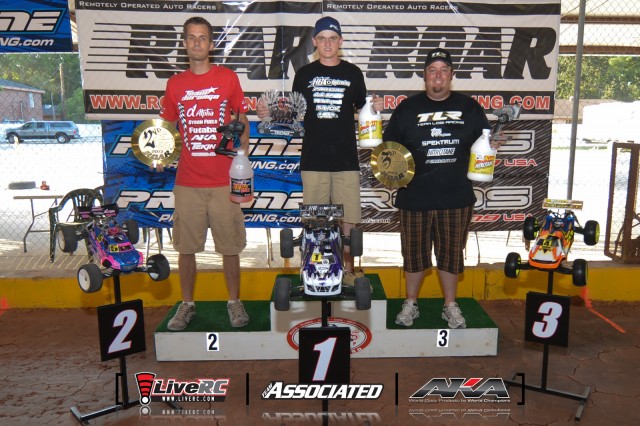 Nitro off-road racers wait all year to race in the Nationals. This year, RCCA editors kept you updated throughout the weekend. Here’s what RCCA Editor Aaron Waldron had to say after the weekend in Houston came to an end:

They spent five days at the track for less than an hour of practice, fewer than 30 minutes of qualifying, and just an hour and 45 minutes are all it takes to crown two National Champions. With the expanding prestige of a nitro off-road title at an all-time high, it’s only fitting that this year, a qualifer for next year’s IFMAR Worlds in Italy, would conclude with a wild ending. Hot Bodies’ team driver Ty Tessman became just the second driver to repeat as National Champion in the Truck division, lapping the field on his way to the first back-to-back titles since Ryan Maifield won his second (of three) in 2009. Ryan Lutz, the Silver State class champion, was the best of the rest as he squeaked by the line for a comfortable gap on final podium finisher Mike Truhe after catching him and making the pass late in the race.

The Buggy class semifinals were full of drama, with mechanical issues claiming both two-time National Champion Ryan Cavalieri and dominant event TQ Dakotah Phend. The last two transfer races of the weekend set a 13-car grid that included first-time finalists Drew Moller, Carson Wernimont, and Jake Dellinger. Defending champion Ty Tessman, by virtue of his semifinal win, earned the right to start up front and all cards were in line for him to complete a second consecutive sweep – which would’ve been a first in ROAR competition. A different record was set, however. After winning his first-ever ROAR National Championship in 2007, the first for the Team Losi Racing 8IGHT platform, Adam Drake was the first driver to win a second class title when he repeated just two years later. After following Tessman for over half of the race Drake assumed the lead when Tessman suffered irreparable drivetrain issues. Former National Champion Mike Truhe beat former World Champion Cody King to the line by five seconds to complete the podium.